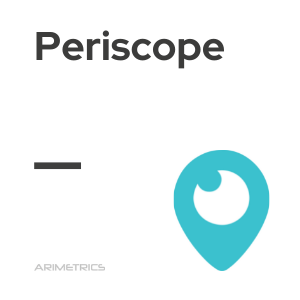 Periscope is a live video mobile app (available for Android and iOS) that allows users to wirelessly stream what’s happening around them for everyone who wants to watch. It is owned by Twitter and was developed in February 2014 by Kayvon Beykpour and Joe Bernstein. It was released a year later.

Although there are currently other tools on social networks to publish streaming video, such as Facebook Live or Instagram Live, its use became quite widespread and was even common in the media.

Hearts and notifications are two key factors in the emissions of this tool. The former work in a very similar way to the ‘likes’ of other social networks, such as Instagram. The difference is that Periscope ‘presenters’ can receive more than one heart from the same viewer in a single video.

Periscope can be a very valuable tool to attract a target audience through images, but to achieve this you have to work on quality videos, planned in advance and that convey a sense of naturalness at the same time.

There are three important functions that this application allows: