PeerTube is a free and decentralized video platform that emerges as an alternative to other platforms such as YouTube or Vimeo. It is part of the so-called
Fediverso, a group of social networks whose main objective is to return to users control over their data and circumvent business, political and advertising interests.

The operation of this group of social networks with open source code is similar: they are hosted on particular servers or ‘instances’,so that they do not depend on a central server. Each ‘instance’ has an owner, who is the one who bears the expenses or covers them thanks to the donations of the users, and is governed by specific rules. Fediverso boasts that the absence of censorship and conversation in a kinder climate are characteristics of its networks.

The best known social network of Fediverso and the one that has the most users is Mastodon, the so-called ‘free Twitter’. In addition to Mastodon and PeerTube, they are part of this network of networks Friendi.ca (Facebook), PixelFed (Instagram), Nextcloud (Dropbox) or Funkwhale (Spotify), among others.

The origin of PeerTube

Peertube was created in 2015 by developer Chocobozz as an alternative platform to YouTube. Two years later, the French non-profit organization Framasoft hired him to make a campaign (‘Contributopia’) to promote decentralized social networks and from that moment the possibility of launching it to the general public was raised.

To this end, it made a crowdfunding campaign in 2018 that raised 53,100 euros from 1,381 donations, more than double the amount that Framasoft planned. A beta version of PeerTube has been operating since March.

Visually, it’s pretty much similar to YouTube. The video plays at the top, with a box below it in which a title, the date of publication, the number of views, the author and other aspects such as privacy, category, language, etc. appear. There is the possibility to enable or not the comments and has the option to share and download. It is possible to subscribe with your own PeerTube account or from Mastodon. Videos are organized on the general page by ‘overview’, ‘trends’, ‘recently added’ and ‘local’. 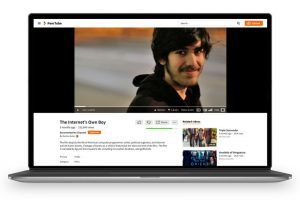 One of the novelties of PeerTube is that it works through WebTorrent technology (P2P or peer-to-peer, hence its name), which prevents a viral video from knocking down a server. What this technology does is that each user who plays a video automatically shares that bandwidth with other users. In this way, each ‘instance’ can host the videos of another ‘instance’ and allow their access without having to change pages.

Another feature of PeerTube is that it uses the ActivityPub protocol, the same as used by other federated networks such as Mastodon and that allows them to be connected to each other. This protocol allows users of the ‘free Twitter’ to follow PeerTube users and comment on videos, thus increasing the interconnection within the ‘federation’.

The video platform says that its main difference with YouTube is the amount of personal information that the second analyzes “to analyze and track you.” In addition, it announces that its developers are working to limit the exposure of the user’s IP address.

To join an instance (you can check all the available ones here) and start using PeerTube, just have a user and an email, so that the Nick will be configured as follows: @usuario@instancia.org.