In-stream video is the format that allows you to advertise within another video broadcast on YouTube viewing pages, on web pages and in partner applications of the Google Display Network. It is also used in the various social networks (Twitter, Facebook, etc.). They are also known as TrueView ads.

Its main feature is that it can appear previously, in the middle of the visualization or after the original video in one of the two existing modalities: with or without the option to skip the ad after five seconds.

It differs from other video advertising formats, such as discovery ads (thumbnails with recommendations from other videos within YouTube), bumper ads (very short and non-skippable messages that play before, during and after another video) and out-stream ads (designed especially for mobile devices)

In-stream videos can be classified according to the moment in which they are shown and also according to the possibility of user interaction. If we take into account when they appear, they can be:

In-stream ads can also be classified into skippable, which are those that include the button with the message ‘skip ad’ or ‘skip ad’ and allow them to be skipped after five minutes, and non-skippable ads, which have a maximum duration of 15 seconds and cannot be interrupted. In addition to the cost, which we will talk about later, they differ mainly in that the non-skippable ones can be used only for the purpose of the coverage campaign and brand awareness and the jumpable ones offer more possibilities.

How to create video in stream

To start advertising in video format you have to first decide the strategy to follow. To do this, it must be taken into account that the investment depends on the type of ad, so that: 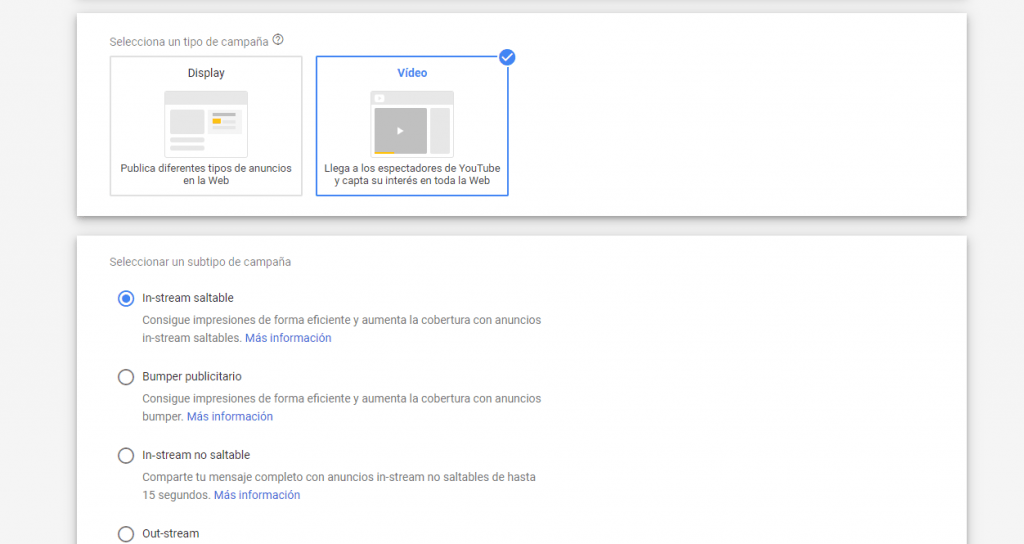 Once the strategy has been decided, and taking into account that any ad must be previously hosted on YouTube, to create a video advertising campaign you have to follow the following steps:

Out-stream videos differ from in-stream videos in that they are ads created specifically for mobile and tablet that appear on websites and partner apps. They are characterized because they begin to be emitted without sound and this is only activated if the user activates it.

They work at a cost per thousand visible impressions, which means that it only counts if the user views 50% of the ad screen for at least two seconds.