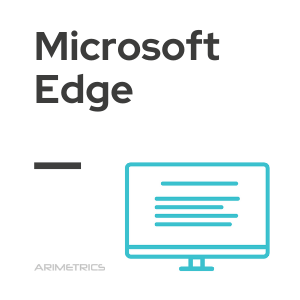 Microsoft Edge is a web browser developed by the American company Microsoft to replace its old Internet Explorerbrowser. Microsoft Edge has been developed specifically for the current Windows computer operating system, Windows 10 and has been built around web standards.

During the second decade of the twenty-first century the Internet Explorer browser was losing users and went from being the most used worldwide to falling below 10% of total web browser users, behind Google Chrome and Mozilla Firefox. To try to reverse this situation, Microsoft launched in 2015 a new model of web browser, the one baptized as Micrososoft Edge. However, regaining market share is an arduous task and today Microsoft’s new browser has not surpassed its predecessor Explorer which, with a share of 6.75%, is ahead of Edge’s 4.61%; figures that are light years away from 67% of Google Chrome.

Microsoft Edge is a multi-device browser,designed for computers, smartphones, tablets and other mobile devices. It uses a rendering engine called “EdgeHTML”that aims to solve the speed problems of its predecessor and that works through Windows 10 thanks to a better management of the memory of the devices that also causes greater savings in the battery of the same. Among its most notable features we can highlight an advanced PDF reading support, adobe flash player built-in, support for asm.js, EPUB reader and the possibility of annotating with stylus thanks to Windows Inktechnology. Among its most negative factors we can highlight the limitation of installing extensions compared to other search engines and a lower strength in terms of privacy and security.