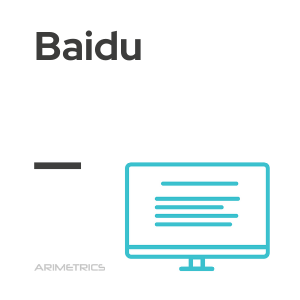 Baidu
is the leading search engine in China. It is known as the Chinese Google. In fact, the design and its characteristics are very similar to those of the world’s leading search engine, which stopped operating in China in 2010 due to the censorship of content imposed by the Government of that country. It is used to search for websites, audio files and images. In addition, it has an email translator and a web map service.

According to Alexa data, it is the most visited website in China and the fourth in the world, which makes it a fundamental factor for companies that want to do business in Asia. 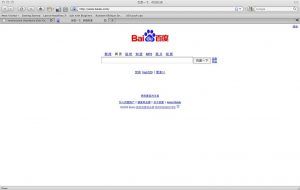 Baidu is one of the largest companies in the world. It was founded in the early 2000s by Robin Li and Eric Xu.

Its name comes from a classic Chinese poem in which a man sought the love of his life. Baidu literally means “a hundred times” and represents persistence in the pursuit of the ideal. It has its origin in the reaction of one of its founders to a comment he heard in the United States.

While Robin Li was in the United States, one of his teachers asked him if there were computer equipment in China. Offended by this provocation, he decided to do everything possible to change that perception of China as a technologically backward country. Now Li owns more than 2,600 million euros as Baidu is the preferred search engine for 85% of the Chinese population.

Like many technology companies, Baidu went public on August 5, 2005.

Baidu is a complete system of online services, among which we can highlight:

At first, it was characterized by its competition with Google, but the restrictions and digital regulations of the Asian giant, made Google and all its applications end up being blocked. So much so that its market share fell to just 1%, with Baidu benefiting greatly by maintaining a privileged position in the Chinese market. Currently only Chinese Baidu users already account for a similar number of Google users worldwide.

However, it is striking that the revenues of both companies are light years away. Without going any further, the Chinese search engine had in the first half of 2019 a net profit of 267 million euros -84% less than a year earlier-, while the parent of Google (alphabet) earned 14,900 million.

How to do SEM on Baidu

The Chinese search engine has a PPC ad tool similar to Google Ads called Tuiguang. The main difference with its competitor is that it does not work worldwide, only in certain Southeast Asian countries or with business addresses registered in China.

In addition to offering the possibility of campaigning in the search engine itself and on third-party sites (Display), Tuiguang offers the following possibilities:

Baidu recognizes the optimization of web pages to improve search engine positioning, with conditions similar to those of Google. For example, it positively values the loading speed of websites. In the SEO strategy in Baidu the most important thing is to take care of the detail of the content to avoid censorship that affects even certain terms.

The controversy between Google and China

The crisis caused by the rupture between Google and Chinese technology and mobile manufacturers, such as Huawei, passed through the Asian country. The low use of the services of the Mountain View giant helped the Chinese population not to be harmed by not being able to use WhatsApp or other tools.

More serious is for Chinese brands the impact on international sales that their products will have if they can not use Google services in countries such as, for example, Spain.