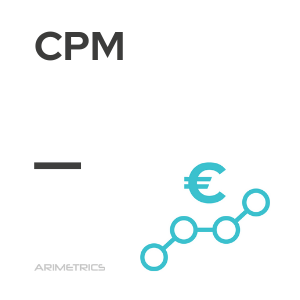 CPM is short for Cost per Thousand, in English the “M” is used as the Roman letter indicating the thousands. The cost per thousand is used by internet providers to put a price on advertising banners. Sites that sell online advertising guarantee an advertiser a certain number of impressions (number of times a banner ad is downloaded and presumably seen by visitors.) The price is negotiated per thousand ad impressions.

Calculation of the CPM

The CPM metric is calculated by dividing the cost of placing advertising by the number of impressions (in thousands) generated by the ad. The CPM is very useful for comparing the relative effectiveness of advertising or media and in assessing the overall costs of advertising campaigns.

How to calculate CPM when visualizations cannot be measured

For media outlets where views cannot be counted, the CPM reflects the cost per estimated 1000 visits to the ad. This traditional way of measuring the cost of advertising can also be used in conjunction with performance-based models, such as percentage of sale or cost per acquisition (CPA).