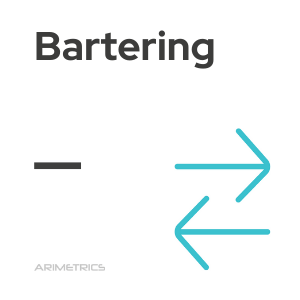 Bartering in English means bartering, a direct exchange of goods or services without the use of money. The exchanged good is called a barter.

Bartering is frequently used in television media, with the television network ceding a part of its advertising space to a certain advertiser in exchange for the brand delivering a product or service, being considered a barter between the medium and the advertiser.

It is also used on some websites, and can consist of both banner exchanges, links, sponsored posts or sponsorship exchanges.

Bartering on the internet

There are numerous websites that serve as exchange markets in which different organizations publish their ads in which they ask to exchange products and services for other types of benefits, but never for money.

In the environment of webmasters it is common to make exchanges of banners or links to improve web positioning with other webmasters, without having any monetary transaction between them.

There are also bartering strategies with influencers and instagrammers, in which the latter receive products, meals in restaurants, stays in resorts, in exchange for mentioning them on their social networks.