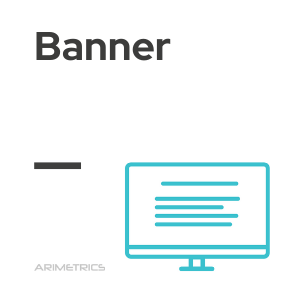 A banner is the most popular advertising format on the internet consisting of including a graphic advertising piece within a web page. They are designed with the intention of attracting attention, so they do not necessarily maintain the graphic line of the site. Their goal is usually either to generate advertising impacts through impressions, or to attract traffic through clicks to the advertiser’s website.

Banners are included in websites either by agreements between webmasters, with exchange of banners or economic agreement, or through platforms that allow their monetization such as Google Adsense.

What a banner is used for

Banners are used primarily for an advertising purpose to publicize the advertiser’s products or services. Its most common use is for the promotion of brands, events, products or websites.

How Banners are measured

The fundamental metrics for measuring banners are Impressions (times a banner is displayed), Clicks (times users click on them) and CTR (number of clicks divided by number of impressions). This last metric is one of the most useful when assessing its performance, since the higher the CTR, the higher the interest shown by users in said banner.

In display advertising campaigns, many types of banners are used, some of which are the following: