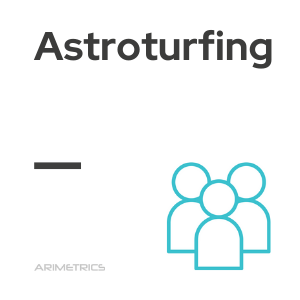 Astroturfing is a marketing and public relations technique based on projecting a false image of naturalness and spontaneity in order to gain support and virality. It is a very common type of campaign, among others, between political parties and large companies whose effectiveness lies in distorting public opinion thanks to new technologies and digital media.

Origin of the term Astroturfing

The name astroturfing comes from the American artificial turf company “Astroturf”, a metaphor that represents very well what this concept is: something artificial to simulate being natural.

How to carry out Astroturfing

There are multiple ways to carry out Astroturfing. In general, the most common ones usually consist of creating fake profiles on social media and online communities to support the brand and attack the rival. Another very recurrent example is that of false cooperation between people with the brand, who have previously been paid. Astroturfing is a little recommended technique due to the notable loss of reputation that it entails in case it is discovered.

Unfortunately, there are many cases of this bad practice that come out every year. Companies should avoid this in terms of the risk involved in carrying out these practices and the negative consequences they can have for the image of the company.