Ambient marketing is the set of actions that lead to a modality of advertising based on using elements of the environment in order to send an advertising message through creativity and originality, attracting the attention of the public to which it is addressed in a non-intrusive way, and appealing among other emotions to the curiosity of the same.

Unlike the street marketing, this type of advertising does not address the public directly, but integrates into the environment expecting the user to address it, and uses the elements that surround the point or focus of advertising, encouraging the public to inform themselves indirectly.

This type of action has had a lot of repercussion both in television media and in the rrss, being some tremendously effective campaigns despite not having a large budget. Thanks to Ambient Marketing, companies can improve the positioning of their brands in an original and viral way.

KitKat usually does environmental marketing and street marketing campaigns every year. Always integrate urban furniture in your ads to make them look like some of your products. 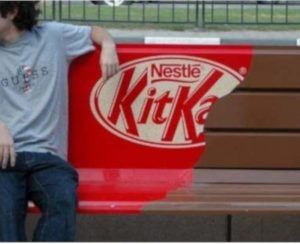 Mcdonald’s campaign was aimed at increasing sales of chips from its establishments and putting them on a zebra crossing positioned its product as “safe” in the mind of anyone who saw it since crossing a zebra crossing is, in principle, safe. 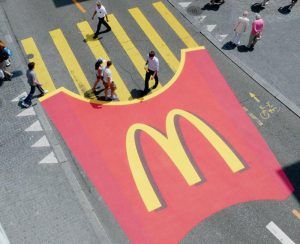 The last of the three ambient marketing ads comes from the hand of Nationwide and reminds us that life passes quickly and we must invest in private pension insurance and increase our investment to have a calmer future. 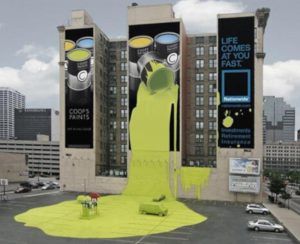 The three actions we see in the images are simple but attract a lot of attention, capturing very well the view of those who walk nearby. In addition, they use part of the urban material such as zebra crossings, fountains, lampposts or benches with what they do not take away space from pedestrians and gives an original touch to that part of the street.

Thanks to actions like this, companies see how sales of their products increase during the duration of these campaigns since they are usually well received by citizens.