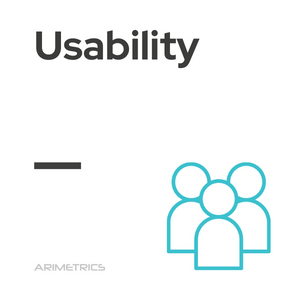 Usability is a term used in website design that describes how well visitors can use a website. Good usability requires the site to be easy to navigate, have a decent design, be consistent across all pages, and also be informative and useful to the visitor.

Usability includes methods of measuring usability, such as analyzing needs and studying the principles behind an object’s perceived efficiency. In human-computer interaction and in the world of computing, usability studies the elegance and clarity with which interaction with a computer program or website is designed (web usability).

The term intuitive often appears as a desirable trait in usable interfaces, which is often used as a synonym for learning. Some experts, such as Jef Raskin have discouraged the use of this term in user interface design, stating that user-friendly interfaces are often easy due to the user’s exposure to previous similar systems, therefore the term “familiar” should be preferred. For example, two vertical lines “||” on the player buttons do not intuitively mean “pause”, but are used by convention.

Others, such as Bruce Tognazzini, even deny the existence of interfaces”intuitive”,since such interfaces must be able to intuit, that is, “perceive the patterns of user behavior and draw conclusions”. Instead, he advocates the term “intuible”,that is, “that users could intuit the operation of an application simply by seeing and using it.”

Usability differs from user satisfaction and user experience because ease of use is also considered utility.

Usability should not be confused with “functionality” either, since this is purely concerned with the functions and characteristics of the product and has no relation to whether users are able to use it or not. Greater functionality does not mean greater usability.