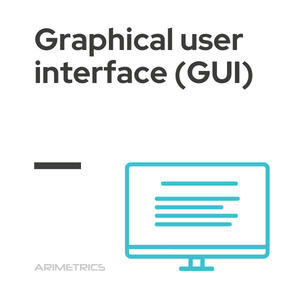 The Graphical User Interface (GUI) is the way a user can interact with a computing device without entering text commands into a console. It is a friendly visual environment that allows the user to perform any action without having to have programming knowledge.

An example of the GUI are the Windows, MacOs or Android environments, thanks to which commands can be sent through gestures or mouse movements, without the need to enter any code.

Evolution of the Graphical User Interface

One of the first novelties that was integrated when the GUI began to be used was the mouse or mousse. Today, in itself, it is the most common element that we find when using a computer or computing device.

Nowadays the visual elements of an interface are increasingly intuitive. Designers strive so that the user may be able to make use of them without prior learning.

With the passage of time this type of interface has evolved and the devices we use as well. Therefore, we have now exponentially increased the use of the well-known touchscreens. Here, the commands are made by touching this screen, without the need for the mouse. Some examples where SPECIFIC GUI is also used with the touch screen are ATMs, monitoring and control screens in industrial uses or game consoles.

What the Graphical User Interface is used for

The goal of the GUI is to facilitate communication between the user and the operating system. When computer science began to develop, these first computers could only be used if you had great computer skills. But as a result of the expansion of this sector, the interface emerged. It was then that the difficulty of using operating systems or computer elements was greatly reduced. One of the pioneers in this field was Apple.

Elements must have a good Graphical User Interface

For a Graphical User Interface to be successful and easily usable, it must meet a number of requirements. The first thing is that it is simple to understand. The so-called learning curve must be fast. The main elements must also be very identifiable. For this, it is important to facilitate and predict the most common actions of a user. The information must be ordered by menus, icons, images… This way it will be intuitive and the operations to make and undo can be done quickly. Usability should be easy.