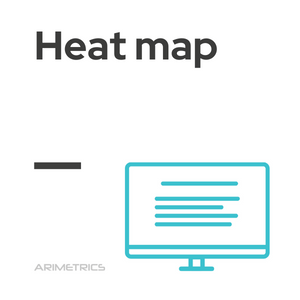 There are many different color schemes that can be used to illustrate the heat map, each with its advantages and disadvantages. Maps with rainbow colors are frequently used, as humans can perceive more shades of color than they can of gray and this would supposedly increase the amount of perceptible detail in the image.

Heat maps are very valuable for optimizing the usability of a web page, as they provide information about which exact points focus the user’s attention from their interactions and behavioral patterns. In this way it has been possible to determine that at present the usual pattern of reading on the Internet is in the form of an F or that the ideal text should not have an extension of more than 50% of what would have been written on a paper medium (according to Jakob Nielsen).

Since they are not of absolute reliability, a website’s heatmaps are often used in conjunction with other forms of web analytics and tools.

The most commonly used heat maps are based on the user’s clicks, but eye-tracking techniques can also be used to monitor the exact points of the website that the gaze is focused on. Other types of heatmaps are those based on the movement of the mouse or those that measure the scroll,that is, to what lower point of the screen the user reaches.