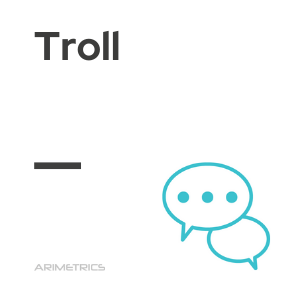 A troll is a user who deliberately posts derogatory or inflammatory comments to a forum, community, chat room, newsgroup, and/or blog in order to attract other users and respond to him, almost always with an offensive tone.

If a troll tries to provoke, they simply have to be ignored. They don’t do things personally, they just try to see who gets into the discussion. Often, a troll will make obvious and inflammatory statements that are meant to attract new users (beginners) to react. This is sometimes called trolling. Despite multiple attempts to limit trolling on the internet, it remains widespread on social media, in comment sections, and anywhere else users can post with relative anonymity.

People with experience in online forums have learned to ignore trolls,and a good moderator will be proactive in blocking these users and deleting their comments. Troll surveillance is a fine line between preventing the bulk of users from making unnecessarily abusive comments and unfairly censoring an unpopular opinion.

In most cases, however, trolling is easy to distinguish from true, provoking debate. Trolls tend towards clearly inappropriate language (sexist, racist, etc.) and rely on generic usernames or anonymous posting statuses.

How to deal with trolls

If we are responsible for managing the social networks of a brand, or we administer a forum, we must take into account how to manage this type of attitude. Usually these are users who only intend to generate conflict and controversy so we must ignore them as much as possible although if they bother other users we can seriously consider blocking them.