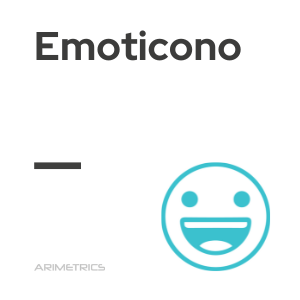 An emoticon or emoticon is a digital expression that reflects an expression of the face with the aim of alluding to a state of mind. They can be sent both through social networks, such as instant messaging, email…

What is the origin of the emoticon?

The word emoticon comes from the English word emoticon, which is the result of uniting the word emotion (translated “emotion”) and the word icon (i.e. “icon”). The Royal Spanish Academy (RAE) includes the concept as an emoticon.

The first emoticons were created through a series of ASCII characters, representing faces of people, usually smiling. With the passage of time, multiple emoticons with different meanings emerged.

The use of colon, a hyphen and a closing parenthesis allow to create the emoticon of a smiling face. In some places the signs are automatically replaced by an image.

What are emoticons for?

Emoticons have several uses. Among which we can highlight:

Use, however, should be relegated to informal settings. It is very normal to use between friends instead of words.

Why include emoticons in the Social Media strategy?

Emoticons are an element that attracts everyone. All this due to their fun character and that animate any message. In addition, they help to improve understanding and comprehension time, just by looking at it.

Emoticons can be an option, more than successful, for the communication of any company: