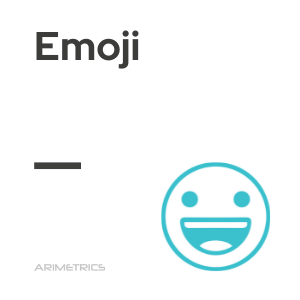 An emoji is a Japanese word referring to 12×12-bit images or ideograms used in writing in digital media (such as computers or mobile phones) to represent emotions, ideas, feelings or other concepts quickly and directly.

What are emojis for?

The use of Emojis has been spreading in recent years, especially with the rise of social networks and messaging apps such as Messenger or Telegram. In growth and popularity of them has been such that today there are even conversations in which these emoticons abound more than the text messages themselves.

Difference between Emoji and Emoticon and Sticker

There is some confusion between these terms, especially the difference between emoticon and emoj.i. While emoticons are composed only of characters and express only emotions, emojis could be considered as an evolution of emoticons formed by bitmaps of 12×12 pixels that make up images and in this way can generate much more complex representations that go beyond emotions and include all kinds of concepts. Stickers,on the other hand, do not have a preset size, are larger than emojis and can represent concepts with even more depth than these.

The appearance of emojis have not gone unnoticed by digital marketing professionals who have seen in them a potential when it comes to doing their work. The use of emojis in the creation of content or when communicating with customers have the following effects:

However, we must bear in mind that for certain environments emojis are very inappropriate since they are considered an element that lacks seriousness and if we want to transmit that image we should not resort to them or we will lose it quickly.