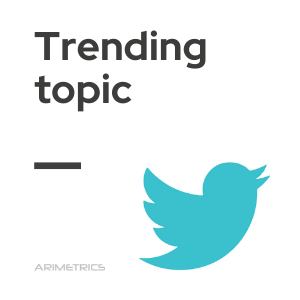 In the social network Twitter, trending topics (TT) are the main keywords or hashtags that are discussed among its Twitter users in real time and that form a list of trends that usually includes about 20 concepts. These trends are an effective and easy way to see what the current issues are in the world or in a certain area and who is talking about them.

The trending topic or topic of the moment is a word, a phrase or a topic that is mentioned in the social network at a higher rate than others. These topical topics become popular in a short time, either spontaneously, through a concerted effort by users, or because of an event that prompts people to talk about this specific topic. The topics covered in this aspect help Twitter and its users to understand what is happening in the world and what people’s opinions are about it.

Sometimes they are the result of strategies agreed by a group of users and also manipulations carried out by actors linked to the political scene and, on a more playful level, of teenage fans of certain celebrities or cultural phenomena, in particular musicians or films. Twitter has modified the trending algorithm in the past to prevent such manipulation, with limited success.

The list of most popular trends is displayed in a sidebar on the main page of the social network Twitter based on the geographical area chosen by the user (everyone or only locally).

Until very recently, trends on Twitter were marked by the use of the same hashtag or expression in a certain period of time, but the company has modified its algorithm to prevent the same tag from being maintained or repeated for several consecutive days in the event that it was a much commented topic. Therefore, now the condition of ‘novelty’ prevails over the number oftweets.

Sometimes there have been controversies around the trending topics of Twitter: this social network has censored several times hashtags that other users find offensive. For example, Twitter censored the hashtag #Thatsafrican and the hashtag #thingsdarkiessay after many of the users protested.

How to get a Trending Topic

Although Twitter is one of the social media that has lost the most users in recent years, especially due to the massive landing of the younger population on Instagram, its influence as a manager of information and opinion is still decisive. The list of the topics of the moment usually marks the content of the media first thing in the morning and is the first source of information for an important part of the population.

In this sense, getting in is that list of trends is a valuable tool to reach the target audience, in addition to a complicated mission within the reach of very few. As in the case of search engines, there are two ways to access this list: naturally or by payment.

Tips for being a TT

Another way to appear in the table called ‘trends for you’ is through a sponsored trending topic,an advertising format that can involve an investment of up to 200,000 dollars for a large campaign in Spain. These ads appear in the first or second position of the table in the home timeline in addition to the ‘Explore’ tab, and are displayed to all users. The results it returns are similar to those of any TT, led by a promoted tweet from the advertiser.