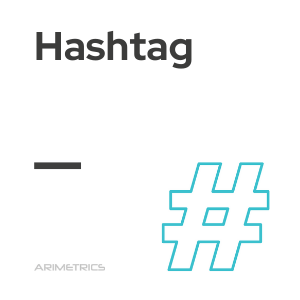 A hashtag is a type of metadata tag used in social media and microblogging services that makes it easier for users to find messages with a specific topic or content. Users create and use hashtags by placing the pad character (or number sign) “#” in front of a word or phrase without spaces, either in the main text of a message or at the end. Searching for that hashtag will then present every message that has been tagged with it.

The hastags as a tool for debate

Hashtags are mostly used to organize topics in discussion forums without a moderator; any combination of characters directed by a hash symbol is a hashtag, and any hashtag, if promoted by enough individuals, can “trend” and attract more individual users to the discussion.

On Twitter, when a hashtag becomes extremely popular, it will appear in the “Trending Topics” area of a user’s homepage. Trending topics can be organized by geographic area or by all of Twitter. Hashtags are not registered or controlled by a single user or group of users, and neither can they be “removed” from public use, meaning that any given hashtag can theoretically be used in perpetuity. They also don’t contain definitions of their own, meaning that a single hashtag can be used for any number of purposes.