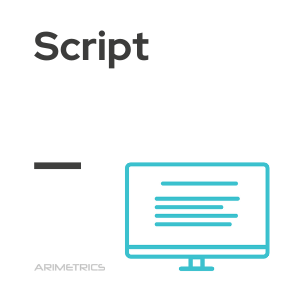 Script is a term used in programming to talk about the snippets of code used to shape tools (both in computer science in general and in particular for tools on the Internet). It is a fundamental part of the software, since it constitutes the code of an application in its entirety or one of its functions. It can also be found on websites and their structure.

What is script in web programming?

In the web programming field, the script refers to a program or code snippet that is included within an HTML document. The code is interpreted and executed by the web browser used by the user accessing that document, and not on the server where the web page files are hosted. This favors the development of certain actions (the possibility of manipulating a database located on the web server).

The concept has evolved to become essential in digital marketing, since it is closely linked to the environment through which it moves. Without a script there is no website, as well as no plugin or even editing tool.

What are scripts for?

You could say that scripts have multiple uses; its usefulness is practically infinite: from developing a website to inserting the plugin of a software or including a function that you want to add to a corporate website.

Any company that has influence in the digital sector must take into account its use. Especially if, in addition to continuing to operate on the Internet, you want to achieve the most important thing: grow. The script is useful for everything: both to create user accounts through a registration and to include or play videos on YouTube, among many other actions.

How to create a script?

To shape a script and include it in a web page you have to follow the following steps: