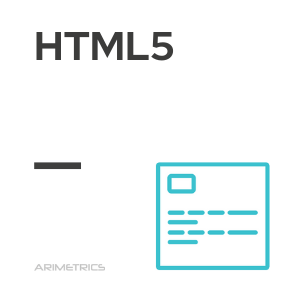 HTML5 is a tag language, used for structuring and presenting content on websites. It was finalized and published on October 28, 2014 in the World Wide Web Consortium (W3C), this being the fifth revision of the HTML standard since the creation of the World Wide Web. The previous version, HTML 4, was standardized in 1997.

Its main objectives are to improve the language by supporting the latest multimedia objects while keeping it easily readable by humans and in turn being constantly understood by computers and devices (web browsers, analysis programs, etc.).

In the wake of its immediate predecessors HTML 4.01 and XHTML 1.1, HTML 5 is a response to the fact that HTML and XHTML code, commonly used in the Web, have a mix of features introduced by various specifications, along with those introduced by software products. It is also an attempt to define a single tag language that can be written in HTML or XHTML.

Includes detailed processing models to support the most interoperable deployments; it extends, enhances and rationalizes the profit margin available for documents and introduces a profit margin and application programming interfaces (APIs) for complex web applications. For the same reasons, HTML 5 is also a potential candidate for cross-platform mobile apps. Many of HTML5’s features have been designed with low-power devices, such as smartphones and tablets.

In particular, HTML5 adds many new syntactic features. These include the new video, audio, and canvastags, as well as the integration of scalable vector graphics (SVG) (replacing the generic objecttags) and MathML for mathematical formulas. These features are designed to make it easier to include and manage multimedia and graphic content on the web without having to resort to proprietary plugins and APIs. It also adds other new page structure elements, such as section, main, article, header, footer, aside, nav, and figure,designed to enrich the semantic content of documents.