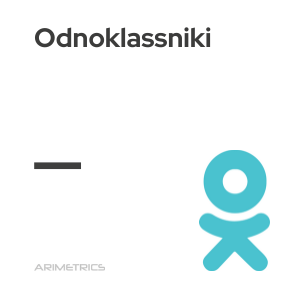 Odnoklassniki (ok.ru)is the second most used social network in Russia behind Vkontakte (with 46 million users, mostly teenagers). It is a Word in Russian (Одноклассники) whose meaning is ‘Classmates’. The use of this term already gives a clue to an origin similar to that of Facebook, which was born to connect university students in the United States.

In the Russian case, the goal was initially to prevent former students from losing contact rather than to establish affective networks between current peers. Therefore, in general, the average age of its users has always been higher than in other similar channels (it is the most popular Russian network among those over 25 years old).

It works similarly to any other social network. The user creates a profile with the personal data he deems appropriate and, once this step is completed, he can share texts, photos, videos, etc.

The look of its interface is very similar to that of Facebook,with a timeline in the center of the page and a selection of highlights in the right column. Practical information and so-called ‘participants’ or followers appear in the company profiles.

As with Yandex,the search engine that rivals Google in Russia, its fame extends to other countries of Russian influence, such as Armenia, Molvadia and Georgia. In some of them it is even the most used social network. It is available in 12 languages.

History and features of Odnoklassniki

Odnoklassniki was developed in 2006 by Albert Mikhailovich Popkov, who was then working in London in the telecommunications sector. Although at first it did not arise with a commercial purpose, the progressive increase in users made Popkov rethink his goals. He currently belongs to the Mail.Ru group, owner of the three main Russian social networks(VKontakte, Odnoklassniki and Moi Mir).

The popularity of Odnoklassniki is reflected in the figures it accumulates. According to Statista, 55% of active Russian users had a profile in 2018. Although this proportion is well below the numbers of VKontake (83%) or YouTube (85%), it is much more positive than that of other networks spread around the world, such as Instagram (46%), Facebook (39%) or Twitter (19%).

All this, taking into account that in Russia there is an estimated population of more than 143 million in 2017 and a digital community of 109 million, so the number of users can be considered very high.

In 2017 Odnoklassniki had 31.5 million monthly active users and 200 million registered users, of which 69% are women. A survey shows that 19% of Russian Internet users use it every day or almost every day.

Like Facebook, the Russian network appears in its own film (‘Odnoklassniki.ru: naCLICKay udachu’, 2013),although in this case it is not the protagonist nor is its creator, as happened with Mark Zuckerberg. The film transcended beyond Russia because it includes in its cast the American rapper Snoop Dogg.