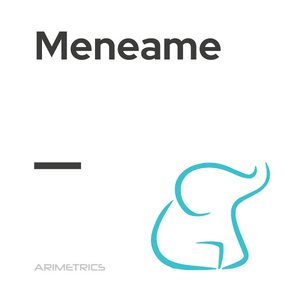 Menéame is the most widely used news community in Spanish. It works very simply. Participants publish content that is voted or, using the language of the page, ‘wiggled’ and depending on these ratings are shown or not highlighted on the home of the web. The objective of the participants is usually that their articles obtain maximum visibility, either for personal interest (some type of relationship with the author of the publication, for example), or because it considers it of general interest.

To avoid as much as possible manipulations and frauds, Menéame users are also valued based on their participation in the community and receive what is called ‘karma’. In this way, it is assumed that the greater the karma, the greater the reliability of what a user shares.

One of the main features of this news container is that it is developed in PHP, phpMyAdmin and Ajax, and is based on open source,published under the Affero GPL license. This has allowed clones of it to emerge, but none with the success of the original.

The website has nearly half a million active accounts (499,535) and had 18 million visitors and more than 263 million page views in 2019, according to its own data from Google Analytics.

Menéame emerged in 2005 as an initiative of Ricardo Gallí and Benjamí Villoslada,who were looking for an alternative in Spanish and open source to Digg, an American tool that combines social bookmarking, blogging and syndication. Over the years its algorithm has been perfected to give it more functionalities and prevent certain users from manipulating for their benefit to artificially give importance to their own news.

A decade after its creation, both Gallí and Villoslada had departed from the front line of the project, although they remained linked to it in some way. Villoslada, responsible from the beginning for the image of the website and financial affairs, became General Director of Technological Development of the Government of the Balearic Islands from July 2015 to July 2019.

Gallí, for his part, announced in February 2016 that he was leaving the direction of Menéame because, in his own words, “he could not dedicate the time he deserved and a boost was needed with new people and ideas.” The website was then in the hands of Remo,in charge until then of accounting advice, and Daniel Seijo,new SEO.

The Menéame logo is an elephant, Eli, inspired by the Linux Tux penguin. 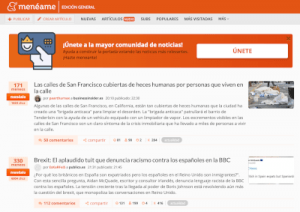 When a user sends a news item to Menéame, it goes to a waiting queue where other users can vote for it and only those news stories with the most votes go to the main page.

One of the aspects that makes the social network work is the degree of user involvement, which are a fundamental filter, since registered users can cast negative votes and rate it.

Such users can, in their negative vote, qualify the news as irrelevant, tired, old, sensationalist, duplicate, spam, microblogging, erroneous or plagiarism. If the news gets too many negative votes it goes to the discarded queue, although it can be rescued if it gets enough votes again.

In menéame not all votes are worth the same,since users have a karma depending on their degree of participation in the community that ranges between 0 and 20. The more karma a user has, the more their vote is worth.

Those news that receive more positive votes,obtain greater karma and are placed on the cover, with the consequent positive effect on the traffic of the web to which they refer (called menéame effect)

The keys to Menéame

Getting to position an article among the highlights of this website has been for years the objective of many digital publications, in need of traffic to attract advertising investments. And it worked. Information that appeared on the front page could experience an increase in visits of up to 20 or 30%. However, at present there are other factors that determine SEO positioning.

One of the main drawbacks of Menéame is that, being a community fed by the users themselves, it is assumed that it highlights the information that is most interesting on the Internet and this is not always the case. It is common for the news on the front page to be headed by sensational events, with political overtones and even fake news.

The page has also been immersed in different scandals caused by its operation, the last of them after its refusal to pay the AEDE fee or, what is the same, the Google rate, approved for news containers.

In addition to the sections to share news, review them, approve them and vote on them, Menéame has two sections that usually attract the attention of new users. One of them is the ‘snoop’. With an access located at the top right of the page, this section allows you to see what is happening on the site in real time and chat, as long as you are a registered user. Faced with the accusations of machismo for using this term, those responsible for Menéame explain that they changed the name to the feminine before the complaints of many women that generic masculine names were always used.

The other section that catches the eye is ‘Nótame’,a space of small notes fed by users successively. Their appearance is similar to that of the Twitter timeline, in which everyone talks about the same issue.

According to a list published in October 2018, between the 20 most commented news in the history of Menéame
until that moment there were six sports news, six publications related to the failed independence process in Catalonia and the controversy created with a user when he unsubscribed for making a criticism of the page itself.

In January 2020 the website has launched a mobile application to facilitate the interaction of its users through smartphones. The application is still in beta.

Tips for publishing on Menéame

In Menéame there is an iron control by moderators and users who make publishing news, and that these reach the front page, not easy.

Here are some of the recommendations to publish successfully on Menéame: