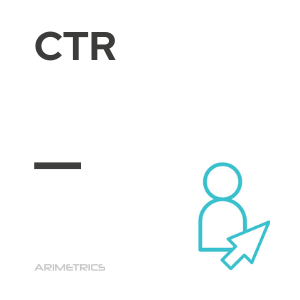 CTR is short for click-through rate. It is the ratio of the number of times a user clicks on an online ad to the number of viewers who see the website that has the advertising. For example, if one in 100 people who visit a specific website clicks on an ad and takes you to the advertiser’s site, then the CTR for that ad is 1/100 or %. The mathematical formula is CTR=clicks/impressions.

The CTR can be improved with creative ads that include a ‘call to action’ to incite the user’s curiosity, in addition to a careful and precise selection of keywords.

How the CTR is calculated

A high click-through rate means that many users click on an ad, but it tells us nothing about the number of sales the ad ultimately generates. For this reason, the conversion rate, the percentage of clicks that lead to actual sales, can be a more useful metric of an advertising campaign’s success.

This indicator is one of the most important within any digital marketing strategy, since it offers a vision of the interest generated in users. It has a direct relationship with SEM positioning, and within this both with SEO and SEA,of which it is also part as a key indicator for example to increase the Quality Score of the keywords attacked. It is also a rate that must be taken into account in email marketing strategies to measure the effectiveness of each campaign.

It is therefore a metric that must be measured and improved regularly, to increase the chances of success in any digital strategy that is being developed.

Each ad and keyword in Google Ads campaigns (formerly Google Adwords) has its own CTR, which can be viewed in the user account.

What is the recommended CTR

CTR is a relative concept, and depends in turn on the medium and source. In the case of CPC campaigns we can talk about that you should aspire to a CTR of 5%, while in a Display campaign the CTR should range between 0.20% and 0.50%