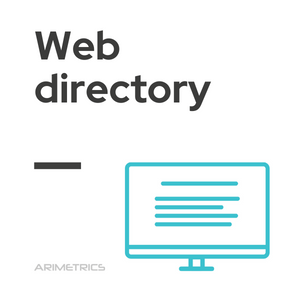 A web directory is a database of websites, arranged in such a way that they facilitate navigation. These links to web addresses are classified according to specific criteria, such as alphabetical order. This helps users search for information in a specific way. Before search engines appeared, web directories were the only way to search for websites on the internet.

How a Web Directory Works

A web directory organizes websites by topic and is usually managed by humans rather than software. A search engine searches sites organized into a series of categories and menus. These collections of links are generally much smaller than search engine databases, as the sites are viewed by human eyes rather than spiders.

There are two ways for sites to be listed in a web directory, either when the website owner submits the site by hand, or when the directory editor comes across that site and decides to list it.

The registration in search engines in SEO

Web directories were long ago one of the main strategies to promote a website, since they were a relatively simple way to get links to a page to reinforce its positioning. However, after the arrival of the changes in the Google algorithm with Panda and Penguin, the Indiscriminate high in directories is a discouraged practice that can have very harmful negative effects on positioning SEO,since, while the presence in thematic and quality directories is not harmful, many of them are considered as link farms. That is why, currently, one of the first tasks that are addressed when starting an SEO project is a link audit to detect harmful links.

The History of Web Directories

With the growth of the Internet and the proliferation of web pages, which grew exponentially, a tool became necessary to group and order all this information. In this way the figure of web directoriesemerged, gigantic databases that thanks to their great utility quickly became popular.

It was from 1995 when some of the most important web directories, such as Yahoo! or DMOZ,were founded and began their growth. During this five years, web directories were undisputed kings of the Internet, however, with the arrival of search engines, the operation of the Internet changed radically.

The appearance of search engines,led by Google, propitiated that the use of web directories as search methods for web pages was progressively becoming disused. However, during the first years of Google it encouraged the use of directories as a positioning tool in the search engine. The result was the proliferation of a massive link building that multiplied the number of directories, causing a loss of value for the user since these did not focus on generating quality content.

To solve this problem Google decided to punish this type of practice with the launch in 2012 of Google Penguin, a powerful update of its logarithm that marked the beginning of the end of web directories. From this moment, these were declining and losing millions of users, with many currently closed their doors (the last DMOZ in 2017).

We can classify web directories in different ways according to their typology:

Advantages and disadvantages of Web Directories

Among the main advantages and disadvantages of web directories, we find:

As for the disadvantages of web directories, we can highlight:

Although many of the most notorious web directories have fallen into disuse, it is worth mentioning some of the most prominent: