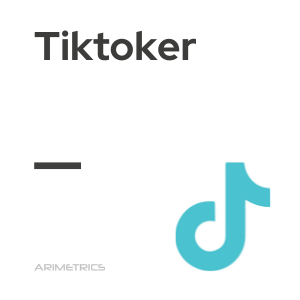 A Tiktoker is a content creator on the social network Tiktok,characterized by being a celebrity in it and having a large number of followers. On Tiktok, users consume videos of just 15 seconds so Tiktokers must be able to condense their content in a very small space of time.

The social network TikTok was born in China with the name of Douyin. In 2017 the developer company decided to attract users in the West and therefore absorbed the lip sync app Musical.ly and changed its name to the current TikTok.

With millions of users around the world, the most popular Tiktokers have become true influencers who generate large amounts of money and have made this social network their place of work.

Characteristics of a TikToker

To be a successful tiktoker, a series of characteristics are assumed: First of all, constancy, Tiktok is a social network where a lot of content is consumed and users will want it to be published on a daily basis. Another very important feature is creativity and originality when creating videos, while having the ability to synthesize them in a few seconds. Finally, it is a network in which music is very important so that skills such as singing, dancing or lipsyncing are also fundamental.

The growing popularity of this social network has not gone unnoticed by companies, and more specifically by those responsible for Digital Marketing,who have seen in these content creators a great opportunity to promote their products. In this way, and as with other social networks such as Instagram, Vine or Youtube, brands arrange promotional agreements with Tiktokers, who advertise their products or services in exchange for economic or other benefits.

How money is made on TikTok

The money is generated for each view per video, as long as you belong to the fund for creators, being able to earn in Spain 2 or 3 cents for every 1,000 views and, between 20-30 euros for 1 million views. The payments that are made will vary depending on the type of content and if they go viral or not or if you are commodifying any brand or product.

Another way to make money is through live broadcasts, followers of the influencers can give virtual coins, in addition to making donations directly, users can also buy emojis and diamonds to give to their favorite creators.

The most influential TikTokers

Among the most influential tiktokers in Spanish in 2021 we can mention:

In the international arena we can highlight, among others, the following tiktokers: