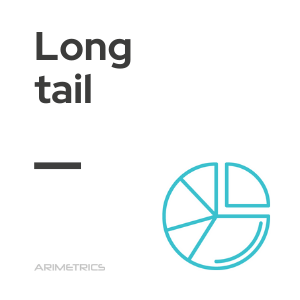 The Long Tail or Long Tail is a concept that refers to a type of statistical distribution, popularized by Chris Anderson in 2004, which is very applicable within the world of online positioning. In this type of distribution, the area covered by low-frequency events is much larger than that occupied by high-frequency events. Applied to marketing in general, this implies that the sum of the smallest market nichesmeans higher sales than those products that have a higher turnover. This model has served to explain the success of multinationals such as Amazon, Apple or Android.

The Key Role of the Long Tail

Contradicting the classical theory that claimed that the sale of small quantities of products at low prices was not economically sustainable, the Long Tail rejects this model and based on new technologies explains the success of large companies such as Amazon or Apple. The app store of the latter is the perfect example in which the set of applications with the lowest audience exceeds in revenue those of greater success, or in the case of Amazon, being able to cover thousands of small niches has undoubtedly been a good part of its success.

Within search engine positioning, the term Long Tail has also gained special relevance in relation to keywords or keywords, and is that in most cases the searches of users of the less frequent keywords will report more income than the most common searches. In this way, it is more beneficial to try to position by more specific terms, with greater relevance and less competition that as a whole will have a greater volume, following the classic Pareto principle.