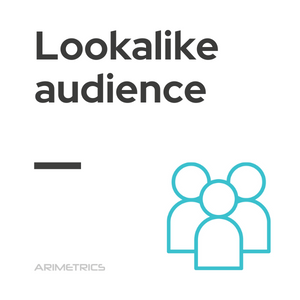 A Lookalike Audience, also known as a lookalike audience, is an option as an objective offered by advertising platforms that allows generating audiences similar to users of a previously defined segmentation.

It is a feature of machine learning systems that allows to improve the quality of advertising campaigns such as Google or Facebook,by targeting a much more specific profile similar to a type profile.

Similar audiences allow you to impact users who have an affinity with the target of a campaign and are part of the fundamental strategies within digital marketing. They are one of the most effective ways to reach those people who are more likely to be interested in the services or products offered by the company, since they resemble current customers.

Facebook Lookalike audiences or Lookalike Audiences are audiences created by the Facebook algorithm based on an original audience such as the followers of a Facebook page, an email list or those collected by a pixel. Based on this Facebook will identify common characteristics among your audience members. This will allow us to segment the campaigns in Facebook Ads to an audience that has similar characteristics in terms of interests and behavior.

In the construction of audiences, the Facebook Pixel plays a fundamental role, since this pixel is responsible for collecting the attributes (geographical data, demographics, interest, behavior) that will be used to define users with characteristics similar to those collected with said pixel. It will also be possible to classify the type users according to the interactions they make: visits to the page, registrations, purchases …

Audiences based on followers

The audience is generated by taking as its origin the users who follow the advertiser and defining a percentage of similarity to those followers. The lower the similarity, the greater the audience because there will be more users in that segment.

In Google Ads, these audiences are called targeting-like audiences. Lookalike audience targeting is available for both Search Network and Display Network campaigns.

Its operation is analogous to that of Facebook’s Lookalike audiences, and allows you to create campaigns in Google Ads in which the ads will be shown to users with the greatest conversion potential.