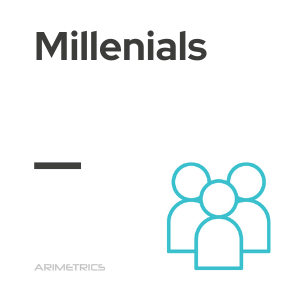 Millennials,also known as Generation Y, are the demographic cohort that directly follows Generation X. The term millennials is considered applicable to people who reached adulthood around the beginning of the twenty-first century. Many experts place the Millennium cohort as composed of individuals born between the first third of the eighties and the second half of the nineties.

Millennials have grown up in a world full of electronics, social media and online connection. It is considered the generation that has received the most attention. As the most ethnically diverse generation, they tend to tolerate difference. Having been raised under the mantra “follow their dreams” and that they were special, they tend to be very confident. Although largely a positive trait, it has been argued that the confidence of the millennial generation has extended to the domains of law and narcissism.

One of the results of this optimism is entering adulthood with unrealistic expectations, which sometimes leads to disappointment. Many of the early millennials went through post-secondary education only to find themselves employed in unrelated or underemployed fields.

Characteristics of this generation

They are mainly characterized by being 100% digital and closely related to technology, which is fully integrated into the activities they develop. Their greatest ally is social networks, in addition to what is related to them causes them interest. For this reason they also prefer to study careers related to digital technology. They specialize more in their professions and this is because they are required to prepare professionally much more than previous generations.

They are more nonconformist and able to achieve whatever goal they set for themselves unlike their parents’ generation. No matter how difficult it may be what they want, they get it independently and without having to depend on someone. His nonconformity is linked to the independence and freedom of his life.

They have a different conception of what success is. For them, success comes down to investing their time and money in traveling to meet new cultures and people. They don’t like commitment and prefer to enjoy.