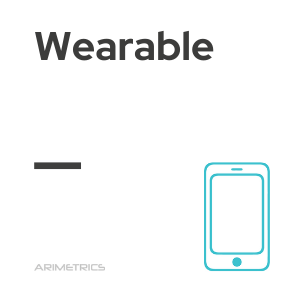 A wearable is an electronic device that is used in the human body and that interacts with other devices to transmit or collect some type of data. The clearest and best known example of wearable is smart watches and activity bracelets, but there are many more. The best known are designed to be used with leisure activities and free time, although the use of these accessories is also very valuable in the world of fashion, professional sports, medicine or industry.

This technology originated, in a primary way, in the decade of the 60s but until recent years it has not fully entered society. They are, normally, everyday objects to which technology has been added with the aim of increasing their performance and having integrated the utilities of other devices. One of the characteristics of wearables is that they are always on and / or running.

They are multitasking devices. In addition, they include network functions such as browsing the web, the possibility of connecting to other gadgets, such as mobile phone, and they can even run their own operating system.

‘Wearable technology’,as translated by its literal meaning in English, is a sector in constant evolution. In parallel to the development of the ‘Internet of Things‘, new examples of these devices appear constantly, some without success, such as Google Glasses, and others with greater implementation. Here are some types of wearables developed by tech companies:

Wearables have become part of our daily clothing, a perfect complement both to go to work and to play sports. Because of this, the computer is no longer limited to our home and becomes a fundamental object.

In the end, any object we put on can become a wearable technology. If you put an electronic device in a glasses, they would already be a wearable. For example, the glasses that Google took out a long time ago.

The applications of Wearable technology are quite diverse. Among them, we can find the following:

As we said before, the best known example is Google Glass, these smart glasses give us information the information we request through the voice. They have different uses like taking photos and recording videos.

Smart bracelets or so-called “smartwatches” are other examples of wearable technology. With them you can control the steps you have taken throughout the day, the calories consumed, the time you have been at rest, the hours of sleep and if you like to swim, you could even count the turns you take or the strokes you do.

Increasingly, sport and technology contribute to the improvement of the former with the manufacture of smart clothing that best suits the body of athletes or, in the case of runners, illuminates them when they run at night.

In this field is where the use of wearables has deepened the least but there are already devices such as glasses that send gps signals to have located the worker as in the firefighters.