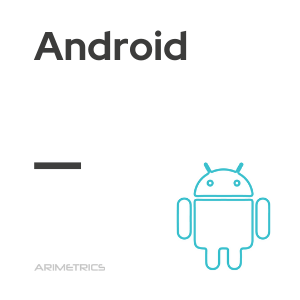 Android is a mobile operating system designed by the American company Google. Based on the Linux operating system, its initial objective was to promote the use of an open, free, multiplatform and very secure system, adapted to mobile devices such as smartphones and tablets. Since its creation, the system has made a strong commitment to attract developers, so it has a variation of Java called Dalvik that allows you to develop applications that exploit the utilities of the devices in a very simple way.

The logo of the brand is a green android (robot), with a minimalist design and rounded shapes.

In 2005 the multinational Google, known for its search engine that we use for SEO positioning, acquires the software company Android Inc. Founded in California in 2003, Android Inc was developing a system-based operating system for Linux computers. With the acquisition of the company by Google, the development of the system continued until in 2007 the creation of the Open Handset Alliancewas announced, a union of hardware and software developers. That same year the launch of the Android 1.0 operating system is announced and a year later, in 2008 the first devices that incorporate it are put on sale.

In just 2 years, the system is a resounding success so that already in 2011 it reaches a market share of more than 50%. Since then the operating system has received dozens of updates, millions of applications for its store, the App Store, and is the undisputed leader of operating systems for mobile devices.

Undoubtedly, the success of this operating system is based on the multiple differentiating features that have made it stand out from its competitors. Among the main features, we highlight: