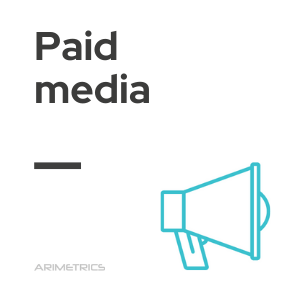 Paid media or means of payment are the means of communication in which you pay to publish the ads. This includes channels such as newspapers, magazines, television, radio, outdoor advertising or direct mail. But also new media, such as blogs, web pages or text messages.

Paid media means paying to promote our products or services through a third-party medium. It is a fundamental part of digital marketing strategies. Therefore, in the process of promoting any product or service, it is necessary to define and develop strategies that include actions in Earned Media, Owned Media and Paid Media.

It’s a good way to promote content in order to boost earned media as well as drive traffic to proprietary media. Paying for content promotion can help keep an ad moving in the media and create more exposure.

Social networks such as Facebook, Twitter and LinkedIn that offer advertising that could potentially help increase a business’ sales can be defined as Social Paid Media.

Another way to gain more exposure for your spread of a site’s content is to pay influencers on Twitter or share your links. The use of remarketing, pay per click and display ads is a direct and most effective way to drive users to websites, to help increase traffic and/or conversions.