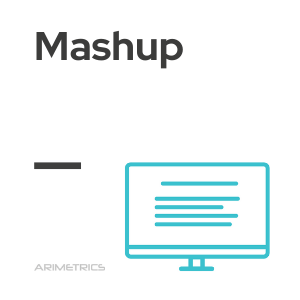 A Mashup or hybrid web application is an application that combines services from several web pages into one to offer a new service. It is common for data integration to be obtained from open APIs. The freedom to integrate all these sources is an opportunity to develop new services in a very short time, based on existing functionalities.

Typically mashups rely on using third-party content through public sources or interfaces. Among the most used fonts to create mashups are Google Maps, Amazon, Flickr, Youtube, Ebay and Yahoo. The ease with which these platforms allow you to integrate your content has led to great success for hybrid web applications.

The term comes from an Anglo-Saxon expression to designate the creation of a song from the mixture of other compositions, usually of very different styles. This origin illustrates very well what a mash up consists of and how it is formed. The term musical has given rise to the name of the hybrid web application from the development of web 2.0.

There is no unanimity between the different classifications of mashups that can be made. Wikipedia, for example, distinguishes between consumer mashups (the best known), data mashups, and enterprise mashups. Other sources point out that a hybrid website can be data, photos (Flickr) or videos (Youtube); shopping (Amazon) or news; or classified according to their construction (first type of hybrid application and second type of hybrid application).

Although in their origin they were more faithful to the Anglo-Saxon term ‘mix’ and it was common for them to combine data from different sources, today it is normal to find a mashup that goes to a single source (Google Maps in many of the occasions).

What information technology experts do agree on is that they are user-centered applications, made by and for him, since his ultimate interest is usually to share the information with other people. If it is enterprise mashups, the user is also the goal on which they are built.

Among the main advantages of mashups we see the following:

Mashup is something linked to the Internet that has existed for more than a decade. Although it is true that the available APIs are becoming easier to combine, the concept has hardly evolved.

As examples of mashups we can highlight: