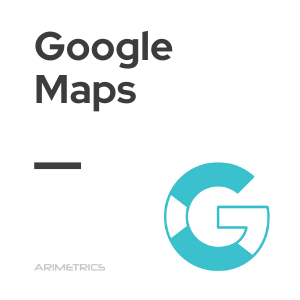 Google Maps is a location search tool that allows you to geolocate a specific point, calculate routes, find the nearest places of interest or see the appearance of a place at street level through Google Street View. It was developed in 2005, initially for Internet Explorer and Mozilla Firefox on PC. However, its use has become widespread hand in hand with smartphones and it has been then when it has become a fundamental element to do local SEO.

Google Maps is a digital street map that is nourished by information from Street View cars adapted to capture images at street level and the GPS signal of users’ mobile devices, as well as other methods such as snowmobiles, scooters or adapted carts that allow you to reach the most remote places and inside the outstanding buildings.

To be able to use it it is not necessary to be registered. Simply enter a search in the corresponding box,which can be a full address, the name of a business, a metro station, some coordinates, etc. The point is shown marked with an icon on a conventional map that can be zoomed out or zoomed in at convenience.

Once the desired point has been obtained, the Google street map offers the possibility of selecting the route to arrive by car, on foot or by public transport. In this last point it has some shortcomings, since it does not include urban bus lines in many cities, although it does add VTC options such as Uber or Cabify.

Google Maps works for both computers and mobile devices (phones and tablets), but it is on smartphones that its maximum performance is obtained by the ease of finding a point in a transfer and the possibility of observing the location of the user himself in real time.

Another of its main advantages is that it can be seen in version of Traditional street map, in relief or with satellite view,which shows the layout of streets and paths at zenith angles, which facilitates the clear appreciation of the type of buildings or the distribution of streets, squares, parks, etc.

It allows you to save locations and download offline maps,a very useful advantage when traveling abroad or when you are going to have connection problems with the device used.

Google Maps offers the possibility to share locations and even make personalized maps visible only by the chosen users. In this way, the exact point of the celebration of a private event or the address of a home can be sent.

It is updated on a regular basis with photographs sent by users and partners, thus allowing to build a complete global image of a specific place.

One of the lesser-known options of Google Maps is the one that allows you to save the exact point where a vehicle has been parked,clicking on the location it indicates, and even lets you add notes, such as the parking number of a parking lot or the plant.

In the Google street map you can see the traffic status with a simple click: just display the menu at the top left and select ‘traffic’. The streets that appear in the selected fragment turn green, orange or red depending on the congestion.

When you are looking for a certain venue, such as a cinema, a theater or a stadium, it allows you to visualize the next events that will be held there.

Google acknowledges that some searches are personalized for the user based on their previous queries and information collected by other company products.

The Mountain View company stores a history of trips and most visited places if that option is kept active. You can consult these movements in the ‘Your chronology’ section of the menu on the left. If you don’t want Google Maps to store that information, you can turn off location history in My Google Activity.

Another option offered by Google related to privacy is the possibility of reporting the presence of a particular person in one of the images obtained with the Google Street View vehicle and requesting that it be blurred. It is also a common practice with unpleasant scenes (for example, an assault or an accident). 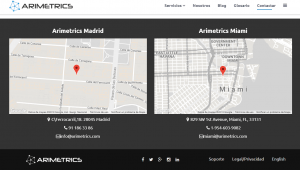 Google Maps is a fundamental tool to boost the visibility of businesses in local SEO. The ideal if you have a physical headquarters is to build and keep updated a file in Google My Business with basic contact information, schedule, etc. In this way, it will be mentioned in the list of Maps results when a query is made about a specific sector. For example, the nearest restaurant or an open pharmacy.

Google maps integrate seamlessly within a web page,even allowing navigation without having to leave the business site. Therefore, whether you are registered in My Business or not (in this case, you will have to develop a personalized map), it is very valuable to embed the map to help the client in the location.

An investigation by The Wall Street Journal revealed that there are 11 million fictitious businesses on Google Maps around the world. The prestigious newspaper maintains that they are created to be sold later, assuring the buyer that their age will make him position him better in the searches; to get customer data and get money for their databases; or for even more serious fraudulent activities by establishing contact with potential customers who are believed to be real business.

One of the innovations that the Mountain View company added in the world’s most widely used mapping tool was the 3D functionality, which is activated at the bottom right in the computer version. Three-dimensional maps are not available for all locations, although they already exist for major cities around the world. It is an evolution of the satellite view that allows virtual tourism without traveling.