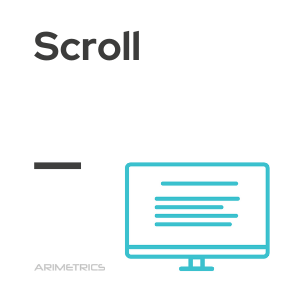 Scroll is the displacement, usually from top to bottom, of the contents that make up a web page, an app, etc. It is also applicable to video games, where there can be a horizontal, vertical or multidirectional scroll.

Scrolling, or scrolling, is one of the fundamental parameters in usability analysis (UX), where it is measured, not only the percentage of scrolling that users make on the page (the user who reaches the end of the page is understood to have made a scroll of 100%), but how long it takes the user to start scrolling (according to several studies, it is usually before 10 seconds)

One of the scrolls that are being used, today, by web pages is the scroll paralax. This consists of the movement of different planes at different speeds. For example, it is as if you find yourself reading a blog post that has an image in the background. Well, when scrolling, the post will move faster than the back element, which is the background. What this does is generate a sense of depth.

Scrolling in websites and apps

It is common to measure percentage of Scroll in the measurement of web pages (Google Tag Manager has a specific tag for it), since in cases where there is a lot of content it is important to know how far on the page users arrive by scrolling, to calculate the optimal situation of the CTA (Call to Action, or call to action), such as a button or video that plays when you click on it.