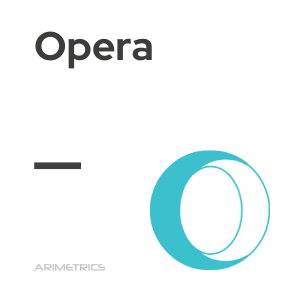 Opera is a free web browser owned by the Norwegian company Opera Software. Available for more than 60 languages, in 2010 it exceeded 100 million users and although it is behind browsers such as Microsoft Explorer, Google Chrome or Modzilla Firefox, it is still a software widely used around the world. Among the most outstanding features of Opera are its great speed, standards support, customization by site, thumbnail tab view, anti-fraud protection, Speed Dial start, navigation through mouse movements, voice navigation, ad blocking, closed tab bin, navigation through sessions and many more features.

Opera has launched several versions among which its application for Android or its browser for Nintendo video game consoles stand out.

Within the world of web browsers, Opera has extensive experience behind it, since it was created in 1996 for Microsoft Windows systems being initially trialware (paid after a trial period).

Main Advantages and Disadvantages of Opera

Nowadays it is increasingly difficult to innovate in the world of web browsers, these being very similar between them, however there are still enough differentiations to choose between one or the other. Among the main advantages of the Opera browser are:

As for the disadvantages, we can highlight: