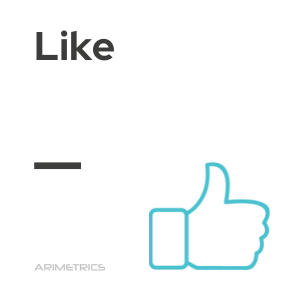 A like is a feature incorporated into social networks and other online platforms that allows the user to give positive feedback to any type of content, and thus connect with what interests them.

The “like” button was popularized by the social network Facebook,which introduced it with a resounding success in 2009. It is a revolution due to the simplicity of the concept, which allows us to express our reaction to a publication. The counterpart to the like would be the dislike, this, more controversial since it implies a negative feedback, is not found in all social networks (Twitter or Facebook lack this for example), being the most prominent network where the same Youtube appears.

There are several utilities that can be extracted from the “Like”. In the first instance it is a measure of the quality, relevance and feelings that a content produces in a user, in this way it can also be a reliable indicator of the popularity of a company, brand or user, as well as the content it generates. A large number of dislikes should put us on alert that our publications are not pleasing our audience and we must improve. Finally, also mention the importance of likes in that many of the social networks are based on these to better position those publications or content that have more “likes”.

Today the “like” is treated as a metric more, which serves companies to make measurements of the popularity of the content they generate in social networks and therefore it is a measure that should not be ignored when carrying out analysis on them. Content creators seek to generate publications as original and useful as possible in order to get the desired likes and highlight these publications above the rest.