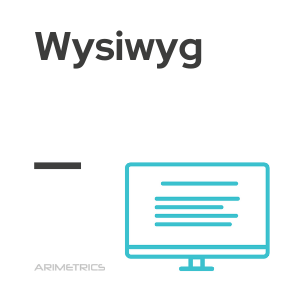 Wysiwyg is an acronym for ‘What You See Is What You Get’ “what you see is what you get”) and refers to the functionality that allows to see in the word processors the final result of the document, which often resembles the print or navigation view. Although it is now a widespread form of work, the term began to be used with older word processors. In those, the sentences were entered in the middle of code or in predetermined fields that then formed the final result without the author of the document being able to appreciate it on the fly.

In most of the current CMS (Content Management System), such as WordPress or Drupal, there is the option to write in word processor format, although in parallel the source code is created in HTML. This code, in which most webpages are written, is fundamental in the crawling of search engines, since it is the language that ‘bots’ understand.

Wysiwyg editors are very useful to facilitate the composition of texts to authors who do not have any knowledge of programming. The Microsoft Word program is one of the clearest examples of this concept and the most used, both for private and professional purposes. Its main advantage is that the introduction of modifications such as titles (H1, H2, etc.), bold, italics and even images is intuitive and simple, and can be appreciated at all times as in the final result.

WordStar,which appeared in 1978 and runs on the old MS-DOS operating system, is considered one of the first word processing programs. With an interface far removed from any program used today and simplified, it is the word processor with which the writer George R. R. Martin has written his successful saga of A Song of Ice and Fire, on which the Game of Thrones series is based.

WordStar was followed in prominence by Macromedia’s Dreamweaver (now part of Adobe’s Creative Clous) and FrontPage (now defunct). Other examples of Wysiwyg editors are Composer, Amaya or Writer.

Advantages of using a Wysiwyg editor

As we have said, although it is a very widespread concept today, a few years ago it was common for an expert in computer science or digital marketing to be needed to adapt a text prepared by a content expert. Now, however, it is a task that can be done by one person and in one go. This is the main advantage of Wysiwyg, in addition to the following:

Wysiwyg editors have advantages, but there are also some disadvantages. For example, the existence of different operating systems and browsers prevents us from making sure that in the format of the document it will be the desired one on all monitors. In addition, incorrect HTML code can occur and then give problems.