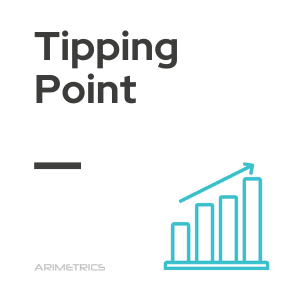 We define Tipping Point as the turning point in which something (a product, brand, idea, company, person) achieves success suddenly, goes from a secondary plane to being a fashion, something totally massive and viral. The tipping point is a concept that takes on great importance with the birth of the Internet. With the arrival of the online, viralization acquires a new dimension and users promote through their actions the instant dissemination of something that the day before was unknown.

Keep in mind that the Tipping Point is almost unpredictable, most of the success is achieved thanks to the growth of day to day and perseverance, and in many cases the arrival of a turning point like this catches so surprisingly to companies that are not prepared to face a growth of such magnitudes in a short period of time.

Despite its difficulty, it is a situation that companies are constantly and hard looking for, since it practically guarantees almost immediate success. It is a difficult phenomenon to predict but if it is achieved, this will allow us to make the most of its enormous potential. Many companies develop strategies according to this, trying to achieve viralization campaigns of products that spread quickly like a virus and impact as many people as possible.

Over the last few years we have notable examples of tipping point cases: