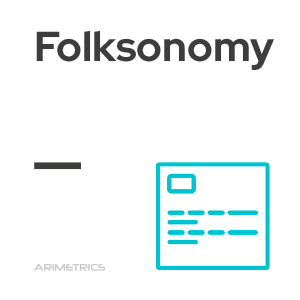 Folksonomies are a set of natural language terms (tags) that are used to describe the content of a document or web resource. The term was coined by Thomas Van Der Wal by merging the words folk (people, popular) and taxonomy (Management -taxis- of the classification -nomos-).

Folksonomies are used in the field of the Social Web, as a resource for social tagging. It differs from traditional digital labeling in that it is collaborative and part of the definitions given by the users themselves.

It is used, above all, in the subject of social networks. In general, the people who enter them usually move the contents and even create it. In addition, they accompany it with labels that classify it according to the categories they consider appropriate.

Based on the definition, and based on what was said by the creator, Thomas Vander Wall, there are two types of folksonomy:

What is a Folksonomy for?

Folksonomies serve, in a fundamental way, to classify all kinds of content found on the Internet.

It is a system that favors search on any platform on the network. Make the audience not only a passive agent, but also have an influence when it comes to establishing categories and classifying any publication. In addition, it is constantly evolving to promote continuous renewal.

If companies use it well, they can achieve a great reach for any type of publication they seek to spread.

Work is currently underway on the development of new resources. It is called Folksontologies and would develop from folksonomies. What would be sought would be to extract the meanings shared by the community.

The advantages of the phenomenon such as:

Despite this, Folksonomy has been criticized due to its lack of terminological control. Those that lead us to events such as