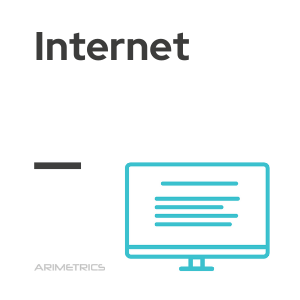 The Internet is a decentralized set of networks interconnected through a set of protocols called TCP/IP. The Royal Academy of Language (RAE) defines it as “the worldwide computer network, decentralized and formed by the direct connection between computers through a special communication protocol”.

Its name comes from the English Interconnected Networks. It is characterized because it allows free exchange and access to information without barriers of time and space. There is talk that it has led to a certain ‘democratization’, since it gives access to a large amount of data at a relatively low cost or even free if the resources available in many public bodies are used. In any case, in Western countries it is strange the home that does not have a broadband connection and at least one computer with internet access, not to mention the evolution of mobile phones since the emergence of smartphones.

The origin of the Internet

The possibility of connecting some networks with others so that a global network could be built arose as a result of an experiment by the United States Department of Defense in 1969,in the middle of the nuclear race. Although the most widespread version is that a communications system was sought in case of a possible attack, the truth is that the Network had a rather academic origin and among the objectives of its creators was to be able to exchange information with institutions throughout the country without having to invest in a huge number of expensive computers. Thus, the Initial Network(ARPAnet,Advanced Research Projects Agency Network) was born, which connected universities and high-tech centers with companies to exchange scientific and military data.

Although sometimes confused, the Internet and the World Wide Web (WWW) are not synonymous. The second is a system developed in 1989 by Tim Berners Lee and Robert Cailliau to access connected information through the http protocol (HyperTex Transfer Protocol), which uses the Internet as a means of transmission and has extended its use in an unimaginable way.

Bill Gates,co-founder of Microsoft and one of those responsible for the technological revolution of recent decades, has already predicted that “what is not on the Internet does not exist”. Nowadays, all public institutions, brands and even SMEs are obliged to have a website or, at least, presence on social networks with basic information about their activity and access to different actions. The irruption of the Internet in the daily lives of people, especially in Western countries, was unpredictable before the 90s of the last century. Since then, the transformation of societies is evident and its scope incalculable. Among the most notable changes that have been experienced we can highlight:

The disadvantages of the Internet

The unbridled speed with which it has infiltrated all aspects of society in a short period of time and its constant evolution have meant that the Internet has many regulatory gaps and insufficient self-control. Therefore, periodically there are incidents that highlight the disadvantages that the universal connection can have and that we could summarize in the following: