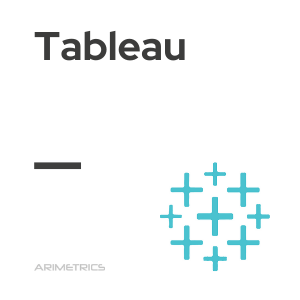 Tableau is a software of data analysis with an excellent visualization and presentation layer, considered by many as one of the best programs for visual presentation of data and with very high ranking in ease of use, so it follows Microsoft Excel very closely. Especially used for Business Intelligence, it simplifies data to present it in an understandable and intuitive format.

Like Google, Tableau was created in Mountain View (California, USA) in 2003. Its founders were Chris Stolte, Christian Chabot and Pat Hanrahan,who set out to combine a structured language of database search with a descriptive language to represent graphics in a very visual way.

The origin of Tableau is in a project of the US Ministry of Defense developed by Chris Stolte, who at that time was doing a doctorate, through the Department of Computer Science at Stanford University. The project’s aspiration was to facilitate people’s ability to analyze information, something that was perfectly connected with Stolte’s research on relational database visualization techniques and his beginnings as a programmer.

Pat Hanrahan was Stolte’s PhD tutor, although in the US he is best known for being the creator of the successful animation studio Pixar. The three co-founders created VizQL, a visual database language that presented analytics with a simple user action.

Since its creation, like any technology company that intends to survive, the company has undergone an evolution according to the new times. Since 2016, Tableau’s President and CEO is Adam Selipsky,responsible for the design of Amazon Web Services.

Salesforce appreciated the value of the company in relation to big data and acquired it in June 2019 for 15,700 million dollars, which made it the protagonist of the largest software purchase operation in history. At the time, Tableau, which is publicly traded, had 86,000 commercial customers.

The operation of the software is very simple. Tableau allows you to drag and drop large amounts of data onto a digital “canvas” and make graphs instantly. The idea behind how Tableau works is that it’s easier to manipulate what’s going on in the interface so you can see what’s being done right and, by extension, what’s being done wrong. Tableau has been defined as a more advanced form of the PivotTable.

There are different plans and different rates, ranging from $ 70 per month for private users to prices from $ 12 to $ 70 per user (with a minimum in each case) for companies. It also offers the option to provide ready-made reports to send to customers. It has a free trial version.

There are also four levels of support to cover the problems that may arise from its use: free, technical support, elite program and OEM (for users who have integrated the tools into their applications).

Tableau recommends that its software be used in the sectors of big data, marketing analysis, IT analysis, education or analysis by public institutions or governments. One of its best known functionalities is the processing of geographical data with interactive maps that can be of the following types: flow, source-destination spider, heat, point distribution, choropletic (by regions and colors), etc.

The software company offers several types of product to suit the specific needs of the user. In this way, there are more basic versions to work on desktop and the option to do it directly in the cloud. Tableau thus adapts to the new organizational trends in companies, with time and spatial flexibility in community work.

These are just some of the products available:

The company has also promoted the creation of a community in which users can raise their questions, share their concerns and learn the stories of other people who work with Tableau. Those interested can complete their knowledge about this platform in the regularly scheduled virtual and face-to-face events and blog.

It also has a section called ‘knowledge base’, with resources and best practices to get the most out of this tool.

The software has numerous advantages that make it a tool of increasing use. We could highlight the following:

Although Tableau works similarly to the popular spreadsheet program, these are not the same tools. Tableau is a data presentation software that imprints the importance in the clear visualization of the same. Excel, on the other hand, is limited to working on the processing of data through rows and columns.

Excel is more focused on predefined goals that are extracted through data and formulas. Tableau allows you to analyze data without specific objectives. Work with hypothetical visualizations with data comparisons differently.