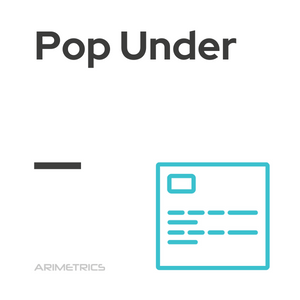 The pop-under is a type of digital ad that appears in a separate window to the one that the user has open. It can only be viewed after you have closed the browser window as it opens behind the page that the user is querying.

The pop under are the windows that open at the bottom of the visible field of the browser, with the aim that they are not seen and closed immediately.

It differs from the pop-up in that it opens in a separate browser window and is hidden under what the user is seeing at the time: this way they will not notice their presence, unless they do it later.

Many consider pop-under to be a better solution, as it prevents users from being distracted from what they are doing.

Advantages and disadvantages of pop-under

Some of the advantages of pop-under are the following:

Some drawbacks of pop-under are as follows: