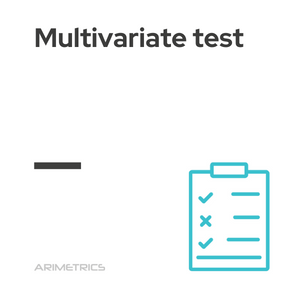 A multivariate test is a technique to test a hypothesis in which multiple variables are modified. The goal of multiple tests is to determine which combination of variations performs the best of all possible combinations.

Websites and mobile apps are made up of combinations of changeable elements. A multivariate test would change multiple elements, such as changing an image and headline at the same time. Three image variations and two title variations could be combined to create six versions of the content, which are tested at the same time to find the winning variation.

The multivariate test in Online Marketing

Multivariate testing is currently a high-growth area in digital marketing, as it helps website owners make sure that most of the visitors landing on their site are arriving. Areas such as search engine optimization and pay-per-click advertising drive visitors to a site, but multivariate testing allows online marketing companies to make sure that visitors are seeing the right offer, once they arrive at the website.

Google Ads is a clear example of the area of application of these multivariate tests. Paid ad accounts in search engines are complex sets made up of a multitude of elements. On many occasions we need to find out what is the factor that can affect an improvement in the achievement of our objectives, so Google allows us to configure “experiments”, duplicates of ad campaigns on which we are making changes and observations with respect to the original campaign.

Although both types of tests are tests that we should implement as an improvement system in our digital marketing strategy, we should not confuse them with each other, since they present differences: