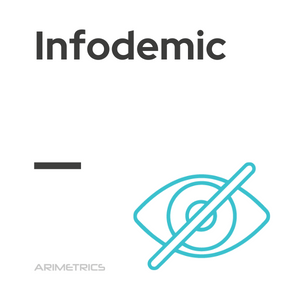 The infodemic is the unverified or false overinformation that arises at key moments such as new viral diseases. The generalization of news that does not attend to reality creates an environment of unrest that can lead to dangerous situations,both by disinformation and by excess of it.

What is the infodemic?

The biggest problem in these cases is that the general public does not finish knowing what information they can stay with and what they can’t. In that same bag enter news that is contrasted and others that are not, so it creates a lack of confidence or an excessive dependence on being informed.

The The World Health Organization publishes that the English voice to name this situation is infodemic and that, effectively, it refers to an overabundance of information (some rigorous and some not) that makes it difficult for people to find reliable resources and a trusted guide when they need it. The Spanish translation is infodemic, morphologically well-formed voice.

What was the first major Infodemic?

At the beginning of the year 2020, the spread of the Covid-19disease, also known as Coronavirus, began to be known in the wuhan area, China. The news regarding its difficult cure, easy transmission and psychosis with all the people who came from anywhere in Asia made it very difficult to discriminate what was the real information from the false one.

The root of the communications from China was taken with skepticism by the dance of numbers that did not correspond to other videos of a more urgent nature. In one of the videos, the Chinese government could be seen building a hospital in a few hours due to the spread of the epidemic.

Once the infodemic spread to each of the countries it became even more dangerous. A number of media echoed information published by others (without hardly contrasting them) or those that simply circulated on social networks. In each area there was a possible case of Coronavirus and a person who had the solution to find the vaccine. This got to the point where the WHO considered the Coronavirus outbreak an infodemic and made a page just to deny the hoaxes that were being published.

This infodemic directly affected hundreds of thousands of people and became a real headache for certain events. In February 2020, the XV Edition of the Mobile World Congress in Barcelona was suspended due to the fear of many large companies of being infected or making their followers infected. The organization of the event decided to cancel it in anticipation and also lost other services such as hotels, restaurants or tourism itself.

In this video you can see some of the fake news that have contributed to create this infodemic about the Coronavirus.