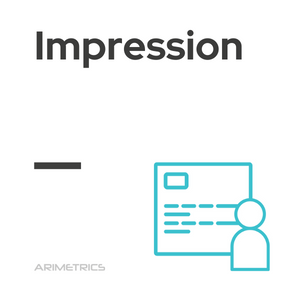 Impression is the frequency with which an advertisement is published on a digital medium and is, presumably, seen by visitors. If the same ad appears on multiple pages at once, this statistic may underestimate the number of ad impressions, due to browser caching. It is the equivalent of net impressions in traditional media. There is currently no way to know if an ad actually loaded.

Impressions are a fundamental metric when measuring the performance of certain ads: in a display ad the objective will be to achieve the maximum number of impressions with the aim of making a brand or product known to the largest possible target audience.

Impressions are also one of the components of other basic indicators in the measurement of online ads: the Click Through Rate (CTR) which is the number of clicks divided by the number of impressions, and the CPM, which is the cost per thousand impressions. This last indicator, which has been the usual one in online advertising, is giving way in importance to the Cost per Click (CPC) and even the Cost per Acquisition (CPA).

Differences between impressions and reach

To make estimates on social networks, reach and impressions are used, two terms that are sometimes confused even though they do not mean the same thing.

Reach measures the number of users who have seen one of our social media posts.

Impressions, on the other hand, is the number of times a publication has appeared on the timeline or wall of our followers. In this case, this measurement is less accurate than the scope since a user has been able to see the same post more than once if a third person has shared it, for example.