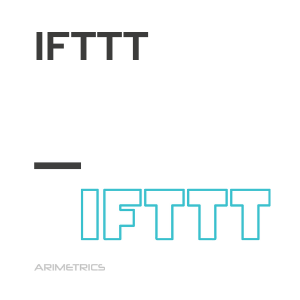 IFTTT is the acronym for “If This Then That”,a free application that allows you to program functions or tasks to do them automatically. It is based on a web service that conglomerates several applications at once and that performs combinations, called “recipes” so that the two selected applications interact with each other when the previously selected requirements are met.

It is not necessary to have programming knowledge to activate the recipes, you simply have to start the trigger or trigger, which can be an event or a button of the application itself. When activated, the second part, the action, is executed, which is the one that will have been chosen previously. This is usually in turn modifiable so that the user chooses which functions occur once the trigger jumps.

To access this service, an account must be created on the MAIN IFTTT page, after which a very simple little tutorial and a small configuration asking what kind of applications you might be interested in is displayed. Also, this tool has a search engine to locate the applications or recipes that want to be made. To make many of them, it will ask us to access the accounts that are available, such as access to email or Facebook account.

Examples of recipes in IFTTT

Creating a recipe is very simple, you just have to choose an application that works as a trigger, in addition to an event that works as a trigger, for example, being tagged in a Facebook photo. Then, you choose the action to perform, which could be to save that image in a Dropbox folder. From that moment, every time the user is tagged in a photo on that social network, the tool will store this image in its Dropbox repository.

IFTTT offers many recipes that allow you to automate tasks and functions. For example, it is possible to periodically change the social media profile picture, receive the weather forecast every morning or turn on the lights at a certain time. Having a home automation home is a great incentive for this application, since, in combination with GPS, you can turn on the heating as the user approaches your home or even check if the oven is on every time it comes out.

Applications that can be programmed with IFTTT

Some of the applications that can be programmed are Dropbox, Feedly, Facebook, Twitter, Craigslist, ESPN, Foursquare, Google Calendar, Instagram, Google Drive, Gmail, Skydrive, Tumblr, Stocks or Bitly, although the list grows every month. It also shows recommendations of recipes that have been made by other users.