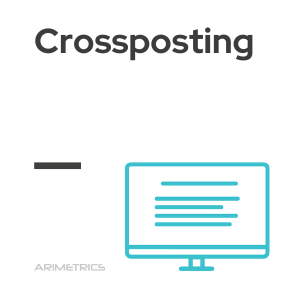 Crossposting, or translated as cross-posting or cross-sending, can also be called multichannel or multiposting and is the act of posting the same message on different social media platforms. It can be done automatically, through the use of tools that distribute the message as soon as it is edited.

The term crossposting was created in forums and internet newsgroups. If a user wanted to know about a topic they could post it in different threads to increase the chances that they would have an answer.

However, the use that is now given to it has nothing to do with its origin. In social networks it is used as a way for a certain action to reach a larger audience and without having to be much workload. The message is edited and manually entered into the channels so that it has a wide distribution. This requires a Crossposting application.

The special tools used for multiple message publishing work on a very simple principle: A message can be edited once the access information for the different networks has been entered. You can then select the networks on which the message should appear. Hashtags, images, etc. can also be added. Many of the tools also support a delay in sending messages as well as tracking social media.

It is a tool that serves to make publications of messages in multiple channels of information. In this way, it serves both to detect the messages that have already been sent previously, through algorithms, and to speed up the work of a company.

Advantages and disadvantages of using crossposting

Here are some advantages and disadvantages of using Crossposting:

The advantages are the following:

The disadvantages are the following:

Some of the most famous cross-publishing tools are as follows: