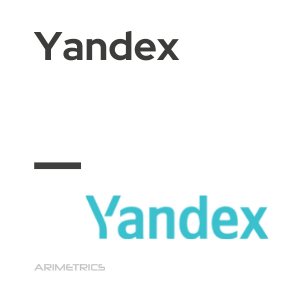 Yandex (Яндекс in Russian) is an internet company that operates the largest search engine in Russia with a market share of around 60% in that country. It also develops a number of products and services that have begun to transcend the internet, such as an unmanned car or a smartphone.

Even though it is not excessively well known outside of Russia, Yandex is ranked as the fourth largest search engine worldwide. It is only behind Google, Bing, Baidu (the Chinese search engine) and Yahoo, according to Comscore.com. It accumulates more than 150 million searches a day and more than 50.5 million visitors (to all the company’s services) daily. It can be considered an internet giant, it is already a company formed by more than 6,000 employees who work in 16 offices spread around the planet.

Its operation is very simple and similar to that of any other search engine. The user does a search on what they need to know and Yandex returns a series of results in the form of text, images or videos. In this sense, it hardly differs from Google.

At the beginning of 2019, Yandex topped the list of the Russian Internet companies with the most value in the market published by the prestigious Forbes magazine. According to this data, the company is valued at 10,742 million dollars. This is almost double that of its competitor Mail.ru Group (5,362 million) and the ad portal Avito (3,850 million).

“In the West they like to call us the Russian Google, but we are much more than that. We are the Uber of Russia, the Spotify of Russia and many other things,”Arkadiy Volozh, one of the creators, stated in 2017 to define the search engine. 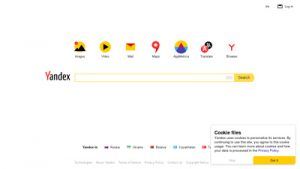 The Russian search engine was created by the aforementioned Arkadiy Volozh and Ilya Segalovich in the late 1990s. Both had previously worked at a small company called Arcadia, which conducted bible searches and patent archives. The search engine yandex.ru was launched on September 23, 1997 and was publicly presented at the Softool exhibition in Moscow. Initially, the search engine was developed by CompTek. In 2000 Yandex was incorporated as an independent company by Arkady Volozh.

Where does the name Yandex come from? They tell on the company’s own website that the name comes from ‘yet another indexer’ (‘other indexer’, in English). It is an abbreviation in which they decided to replace the first two original letters with the Russian letter Я (‘Ya’), which is also the first-person pronoun of the singular (‘I’) to give rise to Яndex.

Yandex has historically been the leading search engine in Russia. This is because Google arrived late to the Russian market because of its initial problems understanding Cyrillic writing. On the contrary, the Russian company focused its efforts from the first moment on it and achieved a consolidated position that at no time has its American counterpart been able to achieve. Yandex also stands out for understanding CrazyFont, a way of writing Russian words with Latin characters widely used by Russians living abroad.

As it could not be otherwise, its main competitor is Google Russia, with 32.8% of the traffic generated by search engines in Russia, followed by Mail.ru (6.2%) and Rambler.ru (2.1%).

Features of the Russian search engine

Like Google, Yandex offers numerous built-in services,such as free email, live traffic maps, music, videos, image storage, and much more. Google was able to attract users through its competition’s weaker products like Hotmail, Mapquest and even Dropbox to use Google’s alternatives. In Russia, Google does not have this opportunity, since the versions of Yandex are very similar.

One of the main features that have strengthened Yandex has been its greater ability for russian search,as Google is not as effective in languages other than English. Another point in its favor is that Android owns 70% of the mobile market in Russia, and of this 52% belongs to Yandex. It has also been very effective with spam, as it has a very strict policy on links.

Within its anti-piracy measures, at the end of 2018 it launched a ‘bot’ to detect copied content and create a ‘pirate registry’ that affects audiovisual works, writings, etc. 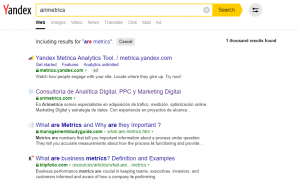 Yandex has a wide range of tools that are widely used in the field of digital marketing internationally. These include Yandex.Metrica (mainly used to measure results and perform web analytics), Yandex.Webmaster (for indexing websites through the robot.txt), Yandex.Direct (contextual advertising) and Yandex.Wordstat (keyword planning).

The ‘Russian Google’ has not lagged behind when it comes to personal assistants and has launched Alisa,the equivalent of Apple’s Siri or Amazon’s Alexa. Those responsible for the company defend that it is an assistant developed with artificial intelligence that makes it more efficient and hold conversations at a more ‘human’ level than those of the rest. To give it more veracity, Alisa’s voice is that of russian actress Tatyana Shitova, who dubbed Scarlett Johansson in the movie ‘Her’ (about a very ‘real’ operating system).

It has an online translator with more than 80 languages available. It allows you to translate small texts entered by hand or complete web pages.

Yandex also offers its users a reverse image search engine,much more powerful than Google’s. It uses such an accurate facial recognition technology (called Sibir) that some joke about the possibility of finding its twin online. The funny thing is that this reverse search engine works even with people who have not used Yandex in their life.

How to advertise on Yandex.ru

The ads work very similarly to those of Google Ads and are managed, as we have already seen, through the Yandex.Direct platform. Advertising in the Russian search engine is key if you want to reach the Eastern European market, especially in booming economic sectors such as real estate or tourism.

Yandex allows ads in text or display format (banners) and its main advantage is that it is possible to choose the place on the results page where an ad appears. In this sense, the search engine considers premium space the header of the page and markets the first position of this space. The same goes for the guaranteed position (right column) and its first result.

The ‘horizontal’ growth of Yandex 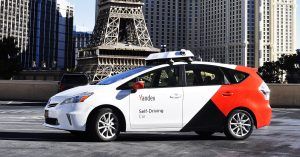 At Yandex headquarters they are aware of google’s power and that the company’s future is not far beyond Russian borders. Trying to compete with the Mountain View giant in Western Europe or the United States would be business suicide and something similar would happen with Baidu in China. Discarded the idea of expanding internationally, it has redirected its strategy to what some experts call‘scaling horizontally’. That is, to focus its efforts on Russia and nearby countries, but diversify its business lines in these same scenarios.

One of its great advances in this regard was the agreement with Uber to enter the taxi business in Russia and neighboring countries (Azerbaijan, Armenia, Belarus, Georgia and Kazakhstan), with a 59.3% stake in the newly created company. Customers can book a vehicle through the Uber app or the Yandex.Taxi app. They can do this through a simultaneous translator for travelers of other nationalities.

Yandex has also entered the race with Google for the development of the autonomous vehicle. It has created a driverless taxi in tests that operates in the Innopolis technology park, located on the outskirts of the city of Kazan, and in Skolkovo.