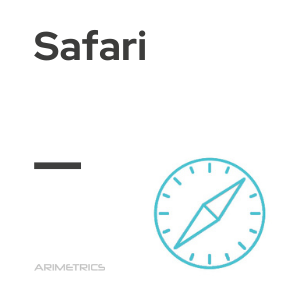 Safari is a web browser developed by the North American company Apple for its macOS(used by MAC computers) and iOS  (used by iPhone, iPod and iPad) operating systems. The name Safari refers to the spirit of exploration that the company wanted to give to the browser.

The project to launch its own web browser by Apple emerged in 2003, when at that time its computers still included as default the browser of the Microsoft company, Internet Explorer. In this way, in June of this same year the first beta of the browser was launched, which every two years was launching a new version. With the growth of the company, especially following the launch of the iPhone smartphone in 2007, the browser was becoming popular and is currently the fourth most used web browser in the world with a share of 4.74% only behind Internet Explorer, Mozilla Firefox and Google Chrome.