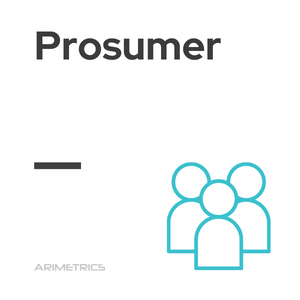 A prosumer is a fusion of the words product and consumer. The term was coined by writer Alvin Toffler, who mentioned it in his book ‘The Third Wave’, from 1980. Although historically it has been used in very different areas, in the world of technology and Digital marketing refers to the user who is both a consumer and a creator of content on websites and social networks.

Toffler’s theory was based on the idea that mass production should give way to a more personalized design and production process that involved the consumer. In the same vein, the authors of the‘Cluetrain Manifesto’ were expressed, an indispensable marketing manual that defends that ‘markets are conversations’ (‘markets are conversations’) and that passive consumers have given way to active prosumers.

Prosumers in the Internet Age

This new climate of conversation established by Web 2.0 and the development of new technologies forces companies to give increasing importance to the prosumer or prosumer. The new consumer is someone to whom the rest of our target audience listens, so their opinions and content take on special relevance in our digital marketing strategies. On the other hand, their valuations can be crucial when launching a new product.

Companies that bother to know what this new type of consumer wants are (almost) assured of success. Allowing the customer to intervene in the production process adds value to our product and moves it away from that massive advertising of the twentieth century that we mentioned before. Here are some examples of companies that knew how to listen to their prosumers: